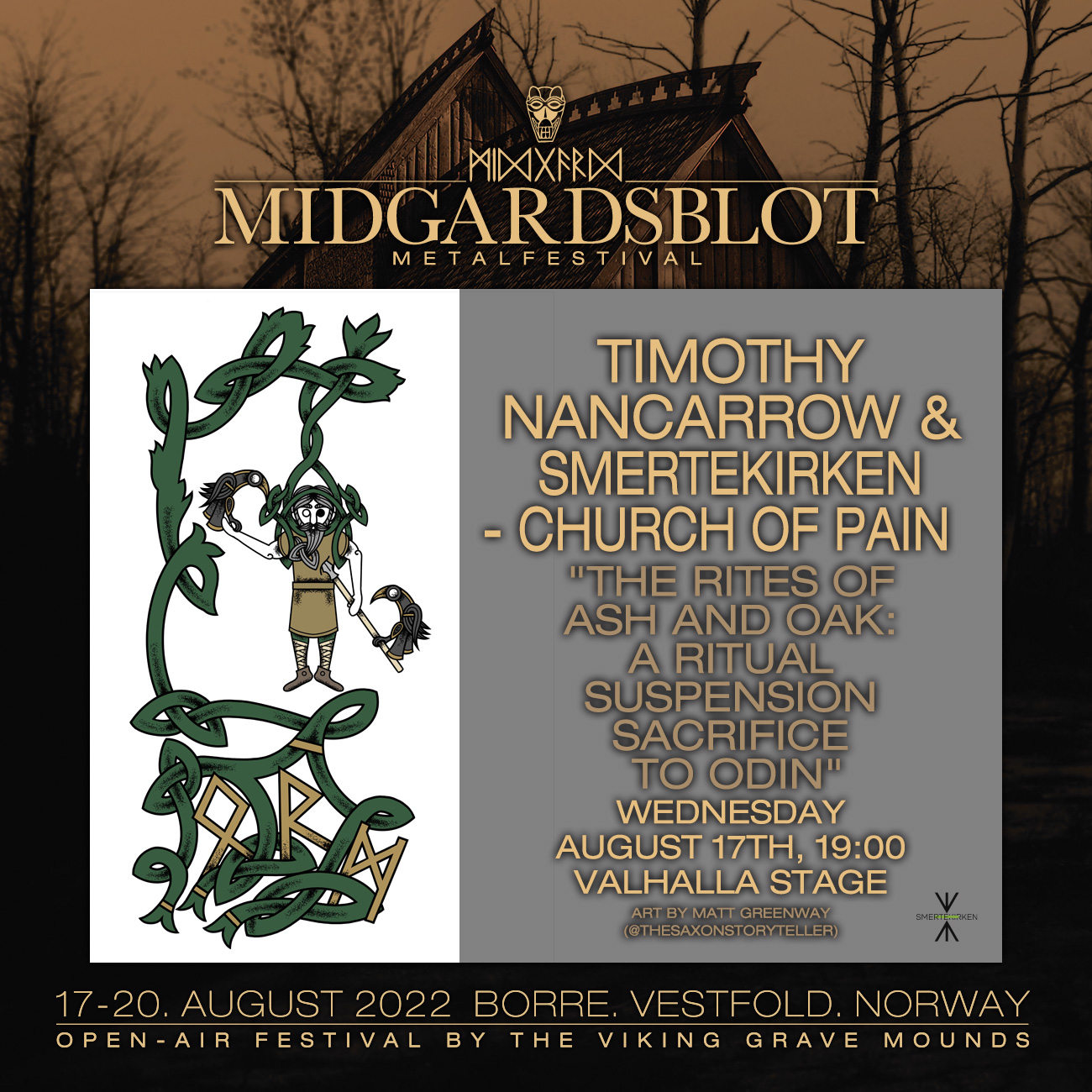 “The Rites of Ash and Oak: a Ritual Suspension Sacrifice to Odin”

Ritual forms one of our key mechanisms through which we can commune with the Gods and the Other Worlds, and to harness and focus upon the elemental energies of Midgard. Through ritual, we seek clarity, an understanding of our destiny, to remember and to grow as individuals and as a community, but also deep knowledge and learning of The Gods, the self, the other, and the conflict between – to seek to bridge the living, corporeal world of consciousness, and those beyond and within.

The Rites of Ash & Oak will encompass a ritual suspension to Odin in emulation of the Allfather’s sacrifice upon Yggdrasil to gain knowledge of the runes. A shaman will seek to communicate with the Gods, and offer up himself utilising flesh-hook suspension, to hang from the tree as Odin did, to take flight as Odin’s ravens seeking knowledge of the Nine Worlds, and to traverse the boundaries between life and death and discover That Which Was, That Which Is, and That Which Is To Become.

This ritual will serve the community of Midgardsblot in a convergence of the collective unconscious, offering up this powerful energy through the conduit of the shaman’s body in a sacrifice to honour the Gods, and to channel their potency into the runes. These runes will be drawn forth in eight castings of augury for audience members – those chosen will be invited to collect their personal rune-casting from the shaman upon return to the corporeal plane, gaining insight into their apportioned fate as revealed to the Gods by The Norns; Urðr, Verðandi, and Skuld.

In this way, we create new trees from old seeds, build new understanding from old lore, and come together as a community to celebrate life, learning, our Gods and ancestors, and traditions old and new as we look to the future together.

Our ritual practitioner, Timothy Nancarrow, is currently engaged in PhD research exploring the virtues of ritual sacrifice in Germanic Pagan communities of the Ancient and Medieval worlds at the University of Newcastle, Australia.

Alan and June are based in Åsvang, Norway and are the founders of Smertekirken - Church of Pain. They use pain rituals to explore the fundamental nature of spirituality and community, to help people explore their physical limits, and for fun. They will be facilitating the ritual title.

One of The Church of Pain’s fundamental beliefs is that pain is crucial to being a holistic person with regards to one’s spiritual health, relationship to Nature, and experience of community. In the modern world’s attempt to avoid discomfort, many people have closed off a vital aspect of their humanity. By avoiding the experience of pain, one diminishes their relationship to nature and, thus, their ability to experience positive and negative feelings. Acceptance of pain can, conversely, awaken hidden sides of one’s self and forge stronger bonds to nature, ourselves, and our fellow beings. Facilitation of this type of awakening is the foundational principal of The Church of Pain.